The age when symptoms start varies a lot and can be any time from birth to old age. In general, the later the condition starts, the milder it will be.

There are two problems that may affect muscles of movement or ‘skeletal muscle’.

The rate of deterioration in muscle strength is typically slow over many years. Some people never have significant muscle weakness. Some people, who are more severely affected, may need a wheelchair, but many people with myotonic dystrophy do not.

The second problem affecting skeletal muscles is an electrical problem, called ‘myotonia’. Myotonia causes muscle stiffness (difficulty relaxing the muscle), which especially affects the hands and jaw. This can be helped with medication supplied by your specialist but usually does not need treatment.

The wiring or ‘conduction system’ of the heart is often affected and this can lead to attacks of dizziness or even blackouts. Sometimes a pacemaker or other device may be recommended. The mechanical system which pumps the heart may be affected but usually it does not cause a problem that needs treatment.

The pumping of air in and out of the lungs, or ‘ventilation’, may be affected. This may cause daytime sleepiness and increase the risk of chest infections, especially after a general anaesthetic. Pneumonia is very common and requires prompt treatment. You should stay up-to-date with your immunisations, including the flu and pneumococcal vaccines.

Because the swallowing muscles are affected, swallowing can often lead to coughing and spluttering when eating or drinking. This can be dangerous. If food or drink goes into the lungs rather than the stomach, this leads to ‘aspiration pneumonia’, which is a severe chest infection. The lower bowels are also typically affected by irritable bowel syndromelike symptoms, with a mixture of constipation, crampy abdominal pain and diarrhoea.

Lens of the eye

It is very common for cataracts to form across the lens of the eye in people with myotonic dystrophy, but they usually cause few symptoms because they appear so slowly. However, early onset cataracts can be easily treated.

The brain can be affected in many ways and excessive daytime sleepiness is one of the most common consequences. Reduced motivation can also be a common problem.

Children with myotonic dystrophy may have learning difficulties, even if they have no muscle problems.

An important recent advance is the recognition of a second, milder condition with features resembling myotonic dystrophy type 1 (DM1). In this condition, weakness tends to occur in muscles close to joints (proximal muscles), such as those in the neck, fingers, elbows and hips. Facial weakness and myotonia (difficulty relaxing the muscle) is often mild or absent. Cataracts and heart problems can occur but are usually less severe than in DM1.

Our DNA is made up of lots of individual building blocks represented by the letters A,C,T and G. The DMPK gene contains lots of Cs,Ts and Gs repeated over and over like this:

The CTG ‘triplet’ in the DMPK gene is usually repeated between five and 34 times in a healthy person. However, in someone with myotonic dystrophy type 1, the CTG triplet is unstable and is repeated more than this.

The number of CTG repeats in the DMPK gene generally correlates with the severity of myotonic dystrophy type 1 and the age of onset. For example, individuals with 50 to 100 repeats are usually mildly-affected and symptoms may not arise until adulthood. In contrast, individuals with thousands of repeats are likely to have the severe, congenital (present from birth) form of the condition. The number of CTG repeats, and hence the severity of the condition, usually increases from generation to generation.

Recent scientific advances have shown that too many CTG repeats leads to abnormal RNA production in the cells of people with myotonic dystrophy type 1. When a gene is expressed (or active), RNA copies of the gene are produced in the cell nucleus. This RNA acts as a messenger that travels out of the nucleus and then instructs the cell’s machinery to make proteins.

In myotonic dystrophy type 1, this RNA production process is disrupted. Too many CTG repeats in the DMPK gene cause the resulting RNA to have an unusual shape (see figure below). It becomes trapped in clumps in the nucleus and affects the function of important proteins that regulate other genes. It is the disruption of these other genes that is thought to cause the body-wide symptoms of myotonic dystrophy type 1. 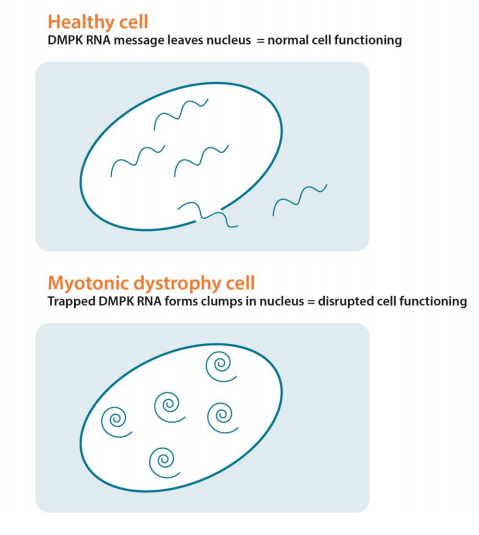 Very few cases of myotonic dystrophy occur ‘out of the blue’ with no evidence of family history. Almost always, one parent is affected, often very mildly. Some parents (or grandparents) may carry a very slight genetic change that will never cause any symptoms and may not be diagnosed. Careful study of the whole family often shows more members with the condition than would appear likely at first.

This condition was initially called proximal myotonic myopathy (PROMM) because affected individuals had clinical signs of myotonic dystrophy but did not have the increased number of CTG repeats in the DMPK gene. It was later discovered that these individuals instead had a similar genetic fault in a different gene. This led to the condition being renamed as myotonic dystrophy type 2 (DM2).

The number of CCTG repeats in the CNBP gene is increased in people with myotonic dystrophy type 2. This is thought to disrupt RNA production in the cell, in a similar way to myotonic dystrophy type 1 (see figure above). Clumps of CNBP RNA build up in the cell nucleus and interrupt the activities of important proteins and genes. Exactly how this leads to symptoms is not well understood, but researchers are looking into this.

In contrast with type 1, the number of CCTG repeats does not relate to the age of onset or severity of myotonic dystrophy type 2. In addition, type 2 does not tend to get worse with each generation.

However both types are dominantly inherited. This means that children of an affected person have a 50 percent chance of inheriting it.

Since many doctors are unfamiliar with the condition (because it is so rare), it is essential that people who have myotonic dystrophy are aware of the problems and complications they may face and share this information with their health professionals. Some of these are mentioned on pages 1 and 2. They do not always all occur, and many people have few symptoms, but it is still important to be aware of them.

Some specialist centres now recommend an active monitoring process of people with myotonic dystrophy type 1 so that the effects of the condition can be found and managed before they become a severe problem.

What are the risks with anesthetics?

Operations and anaesthetics can be risky, even for people mildly affected. It is very important that surgeons and anaesthetists know that a person has myotonic dystrophy before any surgery is planned. Problems only usually occur when doctors are unaware of the condition.

It is also helpful to carry a myotonic dystrophy alert card, and a care plan, both of which contain information to alert emergency and other healthcare professionals to the specific issues that affect people living with myotonic dystrophy. These are available for free from Muscular Dystrophy UK – call the freephone helpline on 0800 652 6352 or email info@musculardystrophyuk.org to order one.

Many people can develop heart problems, which are commonly treatable but can be serious if ignored. Speak to your neurologist or GP about having an annual electrocardiogram (ECG). This can be performed by a cardiologist.

Some people who have myotonic dystrophy may have more trouble with other body systems than they do with their muscles. For example, excessive daytime sleepiness, swallowing difficulties and a range of bowel symptoms may appear unrelated, but they may all be connected to myotonic dystrophy. They may be helped by specific drugs. It is important that people with myotonic dystrophy make sure that whoever treats them is aware they have the condition and knows the wide range of associated problems.

Things to think about during a pregnancy

Women with the condition need careful management if planning a pregnancy: not only is there a risk of a baby being severely affected, but sometimes serious problems during pregnancy and delivery may also affect the mother.

If a couple are concerned their baby may be affected it is possible to test a pregnancy. Your GP can refer you to your local clinical genetics department for more information and testing. Please see our genetic counselling and family planning factsheets for more information.

Will I need specialist equipment?

Equipment for mobility and adaptations in the house can be very useful. Weak neck muscles may require a head-rest when driving.